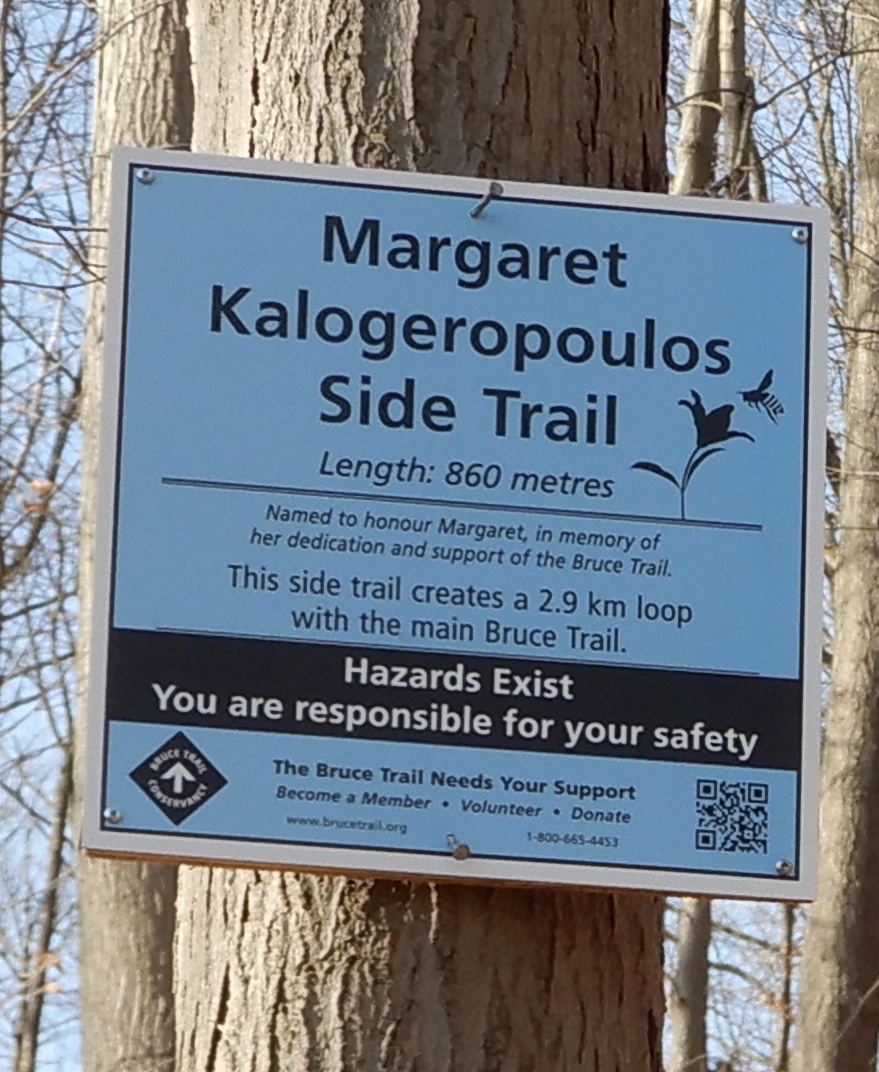 Presentation at the Opening of this side trail made by Trudy Senesi, Friday November 20, 2020.

Today I have the honour and pleasure of highlighting Margaret’s contributions to the Bruce Trail Conservancy and the Niagara Bruce Trail Club.

Margaret joined our club in 1992 and in 1996 she became our board secretary – a position she held until 2001 when she became our Landowner Relations Director, a position she held until 2007.  Margaret attacked this position from 2 directions.  Firstly she spent countless hours in Niagara registry offices cataloguing all properties in the Niagara area they were along the Bruce Trail’s Optimum Route.  She did such a thorough job that her report  became the norm for all other clubs in the BTC. Secondly, she made it a point to personally visit all landowners, leaving her contact information should they have any questions or problems on the section of trail that they so kindly allowed us to have on their properties.

BTC’s Land Securement Secretariat.  Four 4 years Margaret drove to Halton for monthly meetings – even in the dead of winter.  She put forward the case that the BTC should always look for potential purchases of land here in Niagara so that we could secure our precious trail.  Her words were not in vain … just behind us off Warner Road is one of the BTC’S newest purchases - Woodend Meadow - and it is fitting that a portion of her side trail should be located on it.

Trail Maintenance – don’t we all know what that’s about - when a new section of the trail was opened behind Ball Ave. here in St. Catharines she organized a massive cleanup of old tires, scrap metal and other garbage. Consultants suggested this would have cost $25,000 but was handled by our volunteers, filling two large dumpsters with years of accumulated trash.

Her years as Vice-President/President from 2006-2009 saw her joining a dedicated group of volunteers realizing our long held vision of having a pedestrian bridge erected over the QEW. Today the Sand Plant Hill bridge is a reality, formally opened in June, 2008 providing a direct and safe crossing of the QEW.

In 2010 Margaret was awarded a Niagara Region Life Time Environmental Awardfor her work with our organization.  As quoted in an interview with the St. Catharines Standard:

"We're trying to preserve the escarpment. Whether you hike it or just enjoy it, both are important."

As a guest lecturer in the Continuing Education program – Exploring Niagara – at Brock University she reached out to many older adults providing them with knowledge of the Bruce Trail and the Niagara Escarpment. She especially focused on the physical and psychological benefits of hiking – including companionship, socialization and exercise – the same ideas we have today.

Her love of nature brought her into contact with the Friends of Short Hills where she assisted in their Blue Bird Boxes project.  She helped monitor and maintain a number of these boxes.  Just as an FYI - did you know that there have been an additional 721 bluebirds added to the population since the year 2000 thanks to the efforts of these wonderful people.

For the past many years she and her husband, Pete, have been the bee hive keepers.  Here, again our club came out a winner – her “honey baskets” were regularly seen on prize tables or silent auctions at NBTC functions.  I believe there are still hives on the Minchin property – correct?

whenever a property came up for sale on our proposed Optimum Route Margaret was there seeing if we could afford to purchase it;

if a trail needed cleaning up Margaret was there with her gloves on;

planting trees, bushes and flowers in environmentally sensitive areas was a joy to her

these are all projects that Margaret was familiar with – just as familiar as leading hikes.

The Bruce Trail Conservancy now has more than 10,000 members and over 1,000 active volunteers one of the most active and committed was Margaret Kalogeropoulos.

Our goal - preserving a ribbon of wilderness, for everyone, forever – owes Margaret a debt of gratitude.